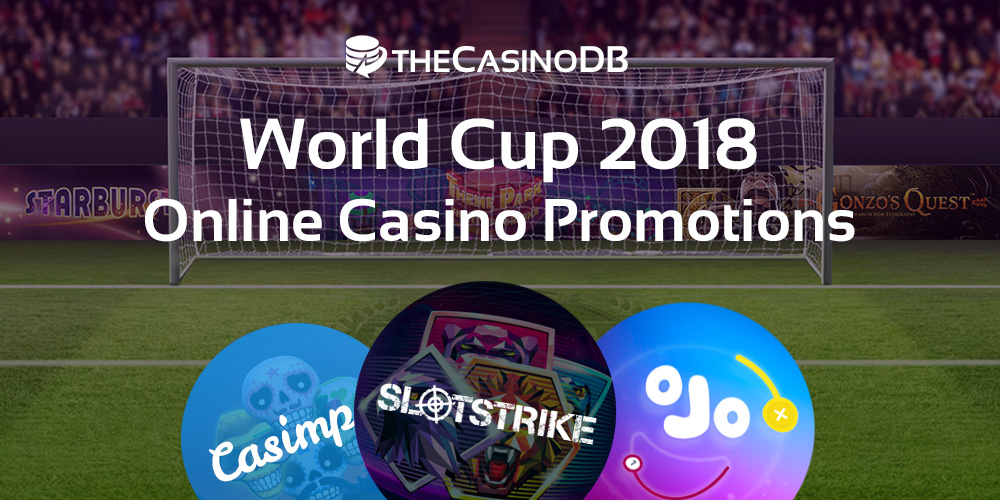 With the start of the 2018 FIFA World Cup Championship the football craze worldwide has been reborn. Many fans have been blessed with witnessing their national teams moving on to the next phase, while others were hugely disappointed by their teams being eliminated. Nevertheless, the show must go on as probably the most interesting part of the championship is ahead of us, with national teams facing each other and trying to get to the next phase.

For the adrenaline levels to be higher, reputable online casino operators have launched a range of exciting as well as rewarding World Cup bonus opportunities and promotions. We have already mentioned the thrilling Goal Smash promotion launched by NetEnt, but there is also a much longer list of offers worth mentioning that can be found at our favourite casino sites.

Naturally, there’s no need for you to wander around and spend time looking for such World Cup promos as we have already selected the best ones for you. Keep reading and pick the ones that seems the most interesting to you.

Let’s start with something as cool as free spins i.e. with the Free Spins Frenzy promo that can be found at Slot Strike Casino. Players can take part in this promo on certain days in July or, more precisely, on the 2nd, 5th, 9th, 12th and 14th of the month.

The range of available bonuses includes two options; the first one is for deposits between £20 and £39, whereas the second is for deposits of £40 or more. Those belonging to the first group of depositing players will be granted 20 free spins, while the others will receive a hefty amount of 50 free spins. The offer applies only to the first deposit made on eligible days and the free spins can be used on the Champions Cup video slot only.

In order to activate the bonus, players must start the game and have in mind that the free spins’ worth is £0.20. After making the deposit, the operator may need up to three business days to credit the appropriate number of free spins. This offer comes with reasonable 30x minimum wagering requirements, while the maximum cash prize that can be won is 4x the bonus amount.

SkillOnNet is a reputable name in the industry; part of that reputations belongs to the company’s generosity at times like this. Namely, SKillOnNet casinos such as Lucky Niki Casino and Play OJO Casino feature the amazing Spin-A-Mini promotion, which grants places a new Mini Cooper every week. Yes, this sounds amazing and it is amazing.

This promotion lasts for four weeks, but players have only two left to opt in and try their chance at winning a brand-new Mini Cooper as the end date is set for 23:59 11th of July. When it comes to the prizes, there’s a lot to look forward to; namely, every week the prize pool is stunning €20,000. The top prize is naturally the Mini Cooper, but the rest shouldn’t be overlooked either. Second-place prize is 2 tickets to a dream destination and its worth is €2,500. Other prizes include a brand-new iPhone X 64GB and Amazon vouchers of different values.

Those wondering how to opt in should simply play the game of the week; this week that game is Legacy of Egypt. After starting the game, players should play at least 100 real money spins and claim a free daily reel spinoff ticket. Then, the next day they can claim the ticket with tournament spins, whose wins are converted into points. Scoring a nice place on the leaderboard will also score you one of the prizes.

Bgo Casino is a top operator and came well-prepared for the leading sports event. Namely, the operator has launched not one, but two World Cup promotions in order to offer football fans multiple chances to score juicy prizes. The first promo is called Spins for Goals, while the second is The Big Shot Prize Draw.

Players that will opt in for the Spins for Goals promo must hit the opt-in button and wager at least £10 on days when at least 1 World Cup match is played. With this, they become eligible for receiving free spins for each goal scored during that day; more precisely, Bgo Casino will grant 5 free spins for each goal scored by England and 1 free spin for goals scored by other countries. The free spins can be used on the Football: Champions Cup video slot.

If winning a share of a prize pool of mouth-watering £200,000 in cash is your cup of tea, then stick to the Big Shot Prize Draw. This promotion comes with four weekly prize draws and ends on 15th of July 2018. Players get 1 prize draw ticket for the current prize draw for every £10 wagered on eligible games such as the Top Trumps Football Stars: Sporting Legends, Ronnie O’Sullivan: Sporting Legends and Frankie Dettori: Sporting Legends. A total of 2,845 winners will be awarded with prizes ranging from juicy £5,000 to modest £10.

Just like Bgo Casino and 888 Casino, LeoVegas Casino didn’t miss a chance to pamper its customers during the 2018 FIFA World Cup. The operator’s promotions run across the various platforms featured at the site and include NetEnt’s Goal Smash Roulette as well as the Live Football Studio. However, the most interesting promo seems to be the LeoVegas Football Club that grants free bets, cash prizes and various sports rewards.

In order to take part in this promotion, players at LeoVegas Casino should simply place 20 qualifying bets that will earn them a Straight to the Bonus Round spin on the Big Bad Wolf video slot; qualifying bets are considered those with minimum odds of 1.50 and at worth at least €20. This promotion, just like the majority of the rest, ends at 23:59 on 15th of July 2018. Players should keep in mind that the promo is valid for players from certain countries only like Sweden, Norway and Germany and therefore should read the promotion rules before opting in.

One operator that deserves praise for its creative approach towards the World Cup is ComeOn Casino. Namely, the operator has launched an entire World Cup Portal where players can find match schedules, scores and lots of bonus opportunities. Moreover, after the end of the group stages, ComeOn has introduced a 10,000-point prize pool, whose points can later be used in the ComeOn! Shop.

Once in the World Club Portal, players will note lots of options for scoring free stuff like cash prizes, free bets and free spins. For example, there’s the World Cup Slot that grants great offers to players. The World Cup Predictor, you guessed it, lets players predict the winner of the championship; its prize pool is impressive 100k and will grant prizes to top 200 players. Other windows in the portal include the Free Bet Club, the Friday Football Quiz and the Supper Odds.

One of the world’s most popular online gambling brands, 888, has naturally joined the football party with its own unique promotion. The FreePlay Football promo at the casino lets players win up to €9,990 in freeplay as they can win up to €300 free play every day until the end of the promotion. This is an ongoing campaign that will be active until 16th of July 2018.

When it comes to opting in and using the promo code, players should keep in mind that they must use the code GOAL when making a deposit; moreover, the can use it up to 33 times per household. The minimum accepted deposit for those that want to enter the promo is €20 and when uploaded alongside the code it grants the player a spin on the wheel of fortune. This spin must be used within 48 hours and can earn the player a range of FreePlay amounts; more precisely, the offerings are between 10% an 100% up to €300 FreePlay per spin. FreePlay amounts are valid for 14 days from the moment of being credited to the player’s account.

Even though the promotions mentioned above seemed to us the best ones, there are a few other to keep in mind as well not to mention the new casinos popping up every day with more. For example, the reputable Guts Casino has Football Happy Hour where players can boost their winnings on live casino games. Codeta Casino has also joined the Football Fever with a promotion that is open to players until 15th of July 2018. This promo offers thousands of cash prizes and surprises for participating players.

Finally, bCasino is celebrating every matchday by giving customers up to 150% match bonuses on deposits of at least £10. The maximum bonus amount is set at £200, while the max cashout is juicy £5,000. In order to take part in this creative promo, players must give predictions for the matches in the chat.