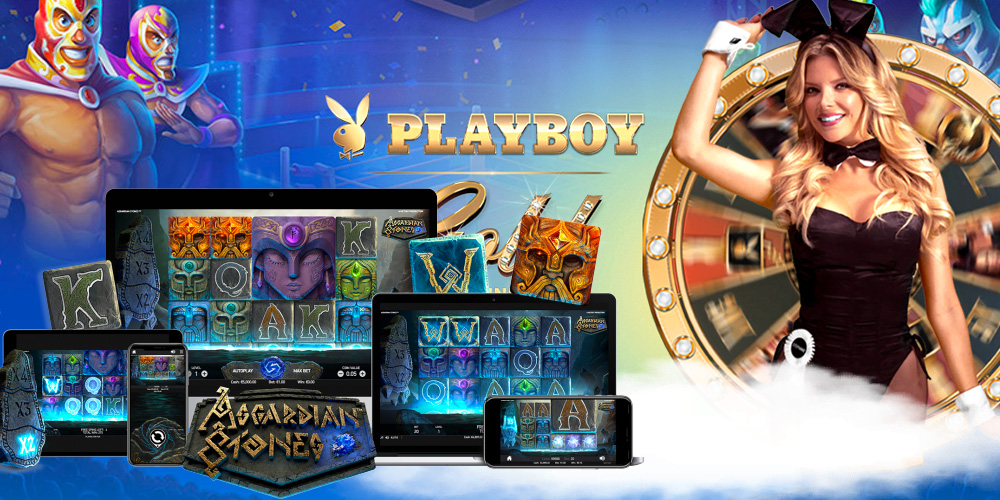 Each and every year fans of online slots are treated with new, exciting picks. Last year consumers were impressed with hundreds of new games, with titles such as Beauty and the Beast by Yggdrasil, Planet of the Apes by NetEnt and Jungle Jim El Dorado by Microgaming being only a few of the thrilling releases. Therefore, it is only fair for players to expect lots of creative, entertaining and engaging video slots by their favourite casino game developers this year too.

Some new games have been announced, whereas a few great picks have been released already as well. Not to spoil the list of top 10 new slots coming out in 2018, we’ll only say that what all these fresh games have in common are innovative themes, rewarding special features and lots of surprises for players. Hence, get ready for some unforgettable online slot action!

Well, let’s start the list with a title that has already been released. Asgardian Stones is the latest top pick by Scandinavian software provider NetEnt. This game features the always popular Norse mythology theme and lets players try to win over the magical stones whose role is to protect the Gates of Asgard. Boasting with several unique and NetEnt trademarked features, this video slot can be immensely rewarding to play. Players can hope to land Colossal Symbols, which would trigger Colossal Crushes; both leading to hefty pays. Asgardian Stones is a 5-reel, 20-payline video slot whose bonus features include free spins and cash prizes granted by a Colossal Symbol Bonus Wheel. Additionally, the game has the popular Avalanche Feature, which is adored by fans thanks to its opportunity to win multiple times with a single spin of the reels.

Microgaming is widely known for its many top video slots as well as its ground-breaking VR roulette. The game developer, however, this year has several awesome online slots in stock for its fans. One of the most anticipated releases is the fantasy themed Cash of Kingdoms video slot. This pick will feature only three reels and 15 paylines; the action revolves around several heroic allies including a dashing King and a feisty Archer, who will help you during your money quest. Cash of Kingdoms is the perfect game for players that love colourful adventures as well as thrilling features. Microgaming, in fact, has equipped this video slot with a brand-new feature named Invading Wilds, which are created on the screen by a barrage of arrows. With such a promising introduction, Cash of Kingdoms is surely a game we can’t wait to try.

Another game provider whose games are always warmly welcomed is Yggdrasil. This developer is popular for its fun themes and wonderfully designed picks. One such game, which is scheduled for 22nd of March, is Easter Island. This 5-reel slot comes with 27-103 paylines that make it very unique as well as rewarding to play. In terms of design, Easter Island will surely stun players; the main heroes are the two Moai stones guarding the reels and often bringing fun to the screen. Another amazing feature of Easter Island are the expanding reels; namely, depending on the winning combination, the playing screen expands for either 2 or 4 extra rows. There are also expanding wilds as well as symbol swap respins too. According to the info released by the operator, the game’s RTP is going to be 96.1%, whereas the default max win in a game round would be set at 47,000.

Playtech has been recognised as an industry leading casino software provider for years now. The company’s treat for its fans in 2018 is not a single new release, but an entire Sporting Legends Suite made of three sports-themed video slots. The games will be released alongside world-class sporting events i.e. The Cheltenham Festival in March, The Grand National in April and The World Cup in June. First, Playtech will launch Frankie Dettori Sporting Legends, followed by a Ronnie O-Sullivan-themed slot and then World Cup Top Trumps. So far, no more info has been published regarding the games, but it is known that they all shall be linked to three Sporting Legends progressive jackpots that guarantee daily, weekly and mega jackpots 24/7.

It comes as little surprise to see that NetEnt has more than one title featured in the top 10 new slots of 2018; after all, it is one of the top game developers on the market. It seems that the company has signed a deal to create a video slot based on the hit TV show Vikings. The show follows the adventures of a popular Norse clan as they try to invade France and England. Vikings, the TV show, has millions of fans worldwide and has won numerous awards over the years; therefore, it is expected NetEnt’s Vikings-based slot to be nothing less than fantastic. Unfortunately, not much is known regarding the game, except that it should be released by the end of the year.

Elk Studios is another top provider whose fans have already been pampered with new releases. The company’s latest pick is dramatically named Kaiju and places players in the midst of a civilisation-saving battle. Kaiju is a 5-reel video slot that offers players impressive 7,776 ways to win in a wonderfully designed futuristic world. In this story, there’s only a handful of humans left alive and the player is a female cyborg trying to help them by hunting down the villain Kaiju. What makes this game special is the engaging storyline alongside the incredibly immersive play. Even though evil, Kaiju brings players free spins in an exciting feature that depicts an epic fight. Playing this feature in the right way can win you a juicy prize of 1,000 times your bet.

Microgaming has an exclusive deal with Playboy, which enabled the provider to launch an awesome Playboy slot a number of years back as well as Playboy themed live dealer tables. Well, this year the story continues in March, when the brand-new Playboy Gold video slot is scheduled to be released. The game will have an unusual number of 6 reels as well as 100 paylines. Just like most of the rest Microgaming picks, Playboy Gold will support both desktop and mobile play. The promo video of the slot also revealed 10 rows and massive 3x3 live dealer symbols. Moreover, the game will feature a generous wheel of fortune as well as lots of free spins waiting to be scooped. Cherry on top is the Multiplier Match Bonus that provides a max win of 10x the prize.

Naturally, this list would be incomplete without at least one announced game by Play’n GO. This online slot provider has released lots of hit games over the years and therefore players should be excited for the upcoming game Imperial Slot. This pick is scheduled for March and will have RTP of 96.5%. According to the provider, Imperial Opera will feature 5 reels and 20 paylines. The betting range of the game would go from 0.20 to 100, while the jackpot will be 2,500. Play’n GO found inspiration in Chinese Opera for this game, thus players can except cheerful design spiced up by crisp graphics. Imperial Opera will have wild symbols, mega 3x3 symbols and a Showcase bonus feature. The gameplay shall be additionally boosted with random features, one of which triggers free spins.

Another pick scheduled for March 2018 is Thunderkick’s Bork the Berzerker – Hack and Slash. The original game Bork the Berzerker is no longer available to players, so fans of the pick will surely be happy to play the Hack and Slash edition. This title will have a RTP of pretty high 97.34% as well as a generous jackpot of 210,000 coins. Thunderkick has created the online slot as a 5-reel one and equipped it with 20 paylines. The main protagonists on the game is Bork, who will go on a quest to save the Maiden from the evil Sorcerer. The game promises engaging gameplay thanks to the entertaining plotline, and the free spin feature too.

Finally, the list of top 10 online slots of 2018 is concluded with Lucha Maniacs by Yggdrasil. Fans of the provider will have to wait for April until the pick is launched in casinos. With 5 reels and 20 paylines, Lucha Maniacs is a relatively standard game. However, what makes the game attractive is the high RTP of 96.00% alongside the impeccable graphics. Some of the game’s features include random wilds, wrestler wilds, sticky wilds and wild symbols. Hitting two bonus symbols triggers the Poster Bonus, while hitting three of them grants free spins. Inspired by Mexican wrestlers, Lucha Maniacs guarantees bombastic gaming sessions and lots of juicy prizes. All this is topped with catchy design and themed Mexican wrestling icons as top-paying symbols.

kootje666 claimed a bonus: Win up to 500 Free Spins Every Deposit at Avenger Slots

kootje666 claimed a bonus: 20 Spins No Deposit at Casino.com

kr95 claimed a bonus: Double Your Money Bonus up to €200 at Casino Intense

beatakow claimed a bonus: Double Your Money Bonus up to €200 at Casino Intense