Roulette is one of the oldest gambling games found in land based casinos all over the world, from the bright lights of Las Vegas to the modest gentlemens clubs in the UK you'll find roulette in all the best casinos. Thanks to the wonders of technology you can now experience the thrill of roulette from the comfort of your own home thanks to Live Roulette. Find the best casino sites that offer this exciting game and are licenced to take bets in the UK.

Roulette is one of the most thrilling casino games. Although luck is needed there’s a little skill involved, with a maximum pay-out of 35 to 1. The game consits of a wheel and a table. The wheel has pockets with numbers 1-36 plus zero and double zero depending on the type.

Once the wheel is spun the ball moves through the pockets before it finally stops in one of them. That number is the winning number. The players can bet on the individual number where the ball will land, but also on pairs or trios of numbers and even on combinations that cover up to half of the numbers. The house edge in standard European Roulette is 2.70%. 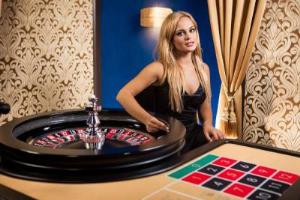 The history of Roulette, one of the most popular casino games nowadays begins way back, in the 18th century. Unfortunately, there are no precise information on how and when the modern version of Roulette appeared for the first same. The word Roulette itself is French and it means little wheel. That is a clear indication that the game was developed in France.

The game was developed by combining a wheel produced by famous philosopher and mathematician Blaise Pascal with elements of few popular games of the time. The game spread quickly throughout Europe and North America, particularly the French-speaking part of Canada.

The game has been played since its appearance throughout hundreds of casinos all over the world. When the first online casinos appeared towards the end of the last millennium, RNG Roulette games were among the first ones that they started offering. These games are software games based on Roulette. The random number generator (RNG) guarantees that the game’s outcome will be entirely random, and in that sense these games are as realistic as land-based Roulette.

Despite the fact that the principle is the same, there’s no croupier in RNG games, there are no other players and some argue that the social element of the game is lost. But all that changed when casinos started offering live Roulette, where there’s a croupier and other players participate as well. The croupier is filmed spinning the wheel in a studio designed just like a land-based casino and then the video is broadcast live through a stream.

The rules of Roulette are quite simple. Players are supposed to place their wagers before the wheel starts spinning, regardless if it is a virtual wheel or a one turned by a croupier. The main wager types in Roulette are inside and outside bets.

At one point in history the game differentiated into two main branches, European (sometimes called French, although there is a minor difference between the two) and American. American Roulette features two zeros, single (0) and double zero (00).

In European Roulette, in addition to the bets mentioned above, players can also make a range of other bets where the key criterion by which the numbers are combined together is their position on the wheel and not on the table.  These bets called classic bets or call bets, because in the past the player had to call out the bet and then offer a chip, simply because there was no field with these bets on the table.

Roulette is a game of chance, the wagers you place and the decisions you make can influence the outcome of the game by very little. Still, there are certain rules that you should follow if you want to be more successful at Roulette.

Firstly, you should never place a large chunk of your bankroll on a single spin, it is best to divide the amount that you have planned to wager on one session and try not to wager more than 2%, maximum 3% of it on a single spin. Next, it is definitely wiser to play European Roulette, as opposed to American, as the house edge is lower.

You can employ one of the available progressive betting strategies if you like, like Martingale or Paroli, but you need to be very careful and make sure that you understand the risks that are involved. Wager on individual numbers, pairs or combinations of three or four numbers if you prefer riskier bets and stick to bets with 1 to 1 pay-outs if you are not keen on taking risks.

Roulette Has Always Been Popular in the UK

Roulette has always been popular in the UK, especially European Roulette. In fact, most land-based casinos in the country that offer Roulette offer this variety. Then RNG online Roulette appeared and most players who took their gaming online preferred the European variety. Recent statistics show that the popularity of live casinos is increasing steadily and it is hard to find a casino operator that doesn’t offer Live European Roulette. Some casinos even offer games named Live UK Roulette or Live London Roulette which are basically live European Roulette with a UK-based croupier, or at least one who is a native English speaker.

All of the providers that offer live casino games include Roulette in their offer and European Roulette is the most commonly offered variety. These are the best live European providers which offer games that can be found at multiple UK operators.

Microgaming is one of the leading software providers in the world. In addition to a great number of RNG casino games, Microgaming also has a live offer which naturally includes Roulette. Microgaming’s live platform allows players to play at multiple tables simultaneously and they can also browse statistical data while playing.

Evolution Gaming is a provider based in the Baltics with offices throughout Europe, including the UK which develops exclusively live games. Their standard Live European Roulette can be found at multiple casinos and in addition to standard features this game also allows the ‘immersive view’ options which presents the game in a wider screen and HD technology.

The emergence of live Roulette and live casino games in general enabled players to enjoy an authentic and realistic casino experience without leaving their living rooms. The games are offered in high quality and with most operators you won’t need to download any software.

With the improvements in mobile technology that were introduced in the past years, live casino games including Live European Roulette became available on mobile devices – Android and iOS, but some operators also support Windows phone. The games are available either in instant play version and no download is required or there’s a special mobile app which can be downloaded for free.